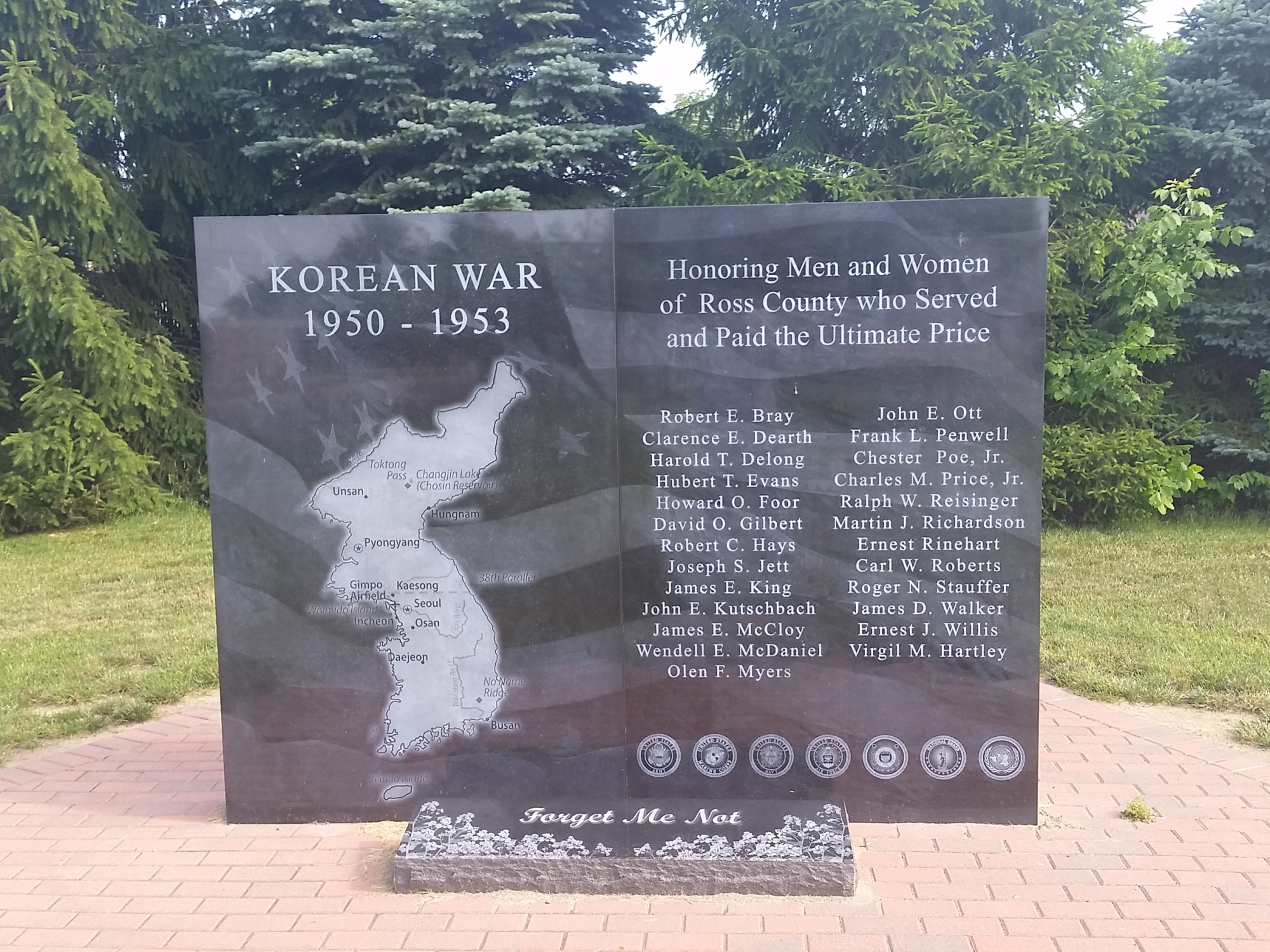 I was able to visit Korean War Memorials in Ohio on three separate occasions in May 2015 on the way to Kansas City, June 2015 on the way back, and in June 2016 returning from another KC trip. With 1774 citizens killed in the conflict, Ohio had the 4th highest total of any state at a time when Ohio had the 5th highest total state population according to the 1950 census, as opposed to 7th highest now. The landscape of Ohio is thick with Korean War memorials, starting with two dedicated in the mid-50s.

The earliest dated monument in Ohio that mentions Korea was dedicated in 1955 in Deerfield and honors “2ND LT. JAMES S. WALKER. JR. AND CORP. PAUL R. KIRKBRIDE, WHO GAVE THEIR LIVES IN THE SERVICE OF THEIR COUNTRY DURING THE KOREAN CONFLICT”. A year later, only six years after the start of the war, on June 24 of 1956 the town of Lansing dedicated a memorial to WWII and Korea vets. More than three decades would pass before another dated memorial mentioning the Korean War was dedicated in the state of Ohio, though it is likely that several other monuments that denote Korea were built from the late 1950s through the mid-1980s, such as a bronze memorial plaque located in the small riverbank town of Addyston near Cincinnati or a monument in Bedford also naming WWII and Vietnam.

The resurgence of local Korean War memorials in Ohio mirrored the push throughout the nation that began in the mid-1980s after nearly two decades of focus primarily on publicly recalling Vietnam. The first memorial of this new cycle to be dedicated was on May 27, 1987 in a cemetery in Middletown, the same year a multi-war memorial was dedicated in South Webster honoring locals who fought in the World Wars as well as Korea. On Christmas Eve of 1988 the town of West Milton dedicated a memorial to all who served in Korea that notes 55,000 American who died and 8,200 Americans Missing-In-Action. According to the state of Ohio page of the American Memorials Directory, the New Philadelphia dual WWII and Korean memorial that is located at the Tuscarawas County Courthouse was dedicated in 1990. The last local monument in Ohio which mentions Korea that was built before the National Korean War Memorial in DC is the Scioto County KIA-MIA Memorial in Portsmouth which was dedicated in 1993.

The official Ohio State Korean War Memorial was dedicated in Dayton on September 9 of 1995, and includes a long walkway recognizing a range of Ohio veterans from various twentieth century wars as well as Korean War veterans from states other than Ohio. The project was also the only Korean War memorial besides the Punchbowl in Hawaii to include names of all US soldiers who were MIA in Korea. Designed by the Dayton based firm of Architectural Associates Inc., the monument was a passion project of AAI owner Bryan Choi. According to the firm’s website “Having lived through the Korean War as a child, Mr. Choi wanted to contribute his services for this special monument.” Several more monuments mentioning Korea would be built across the state before the end of the fifty-year anniversary of the war.

On August 18, 1996 Greenfield dedicated a memorial to local dead from WWII to Desert Storm. On Veterans Day of 2001 the University of Akron dedicated a monument to those killed in Korea, next to the library, at a cost of $160,000 which was raised through fundraising efforts led by local vet Tom Blair.  In 2002 the state of Ohio started dedicating highways in honor of Korea Vets, with parts of US 36, which runs through the middle of the state, as well as a section of Interstate 75 located in northeastern Ohio. Since then the state legislature has designated additional legs of those highways as well as added new roads honoring Korean War veterans, according to this section of the Ohio code last amended in 2011. Also in 2002, the city of Coshocton dedicated a local Korean War monument on the courthouse lawn.

Several towns in Ohio have dedicated memorials mentioning Korea over the last dozen years, starting with the city of Reading north of Cincinnati which dedicated its monument on October 17, 2004. On June 25 of 2006 the city of Toledo dedicated a Korean War memorial, which was designed by local architect Ken Thompson and sponsored in part by the local Arts Commission, located at the Civic Center. The Zanesville WWII and Korean War Memorial, consisting of a pile of helmets inscribed with names, was designed by local sculptor Alan Cottrill and dedicated in 2010. Most recently, and interestingly too, the city of Chillicothe in south central Ohio dedicated a Korean War monument on Memorial Day 2014 that was so rife with inaccuracies that it made national news and had to be fixed, as noted by the OAH. While the original design was criticized not only for images of wars after the 1950s but a lack of names of local Korea vets while the revised version includes those inscriptions as well as a map of the peninsula and the phrase ‘Forget Me Not’ on a second marker (as can be seen in the image at the top of the page).